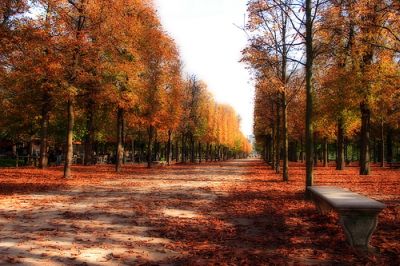 Although my family took several trips back to France when I was growing up, we always went during the summer time. This was mostly because my mother does not believe in traveling for under 2 weeks in most circumstances (which meant going when we were in school was not an option). Because of this, despite my rather extensive time spent in France, I had never seen the country during spring, fall or winter until I moved in Paris in August of 2005.

When I arrived in Paris in mid-August to secure housing and get everything in order before starting my program at the Sorbonne in September, the air was hot and thick with humidity. Every time I descended into the metro, I got hit with a wall of moist, hot air. And despite all of my efforts to look Paris-chic, I would inevitably return home bushy-haired and sweaty with eye makeup on the verge of running down my face.

By the beginning of September, however, something changed, seemingly overnight. Suddenly there was a fresh crispness to the air. The sun was still shining and it was still warm enough to be comfortable in my summer dresses, but suddenly I wasn’t choking on humidity or sticking to my seat. The following months in Paris (and traveling to various places around France to meet my traveling parents during weekends off from class), I discovered that much like at home, autumn was definitely my favorite season in France and an ideal time to be in Paris. The hoards of school tour groups and tourists are gone, the locals are back after their month-long vacations and the weather is usually beautiful.

Before we get to the nitty-gritty, this lovely video of Paris in fall should help convince you this is a good time to go:

Paris in Fall from Dj Veteran on Vimeo.

Getting to Paris in the fall

With great weather, fewer crowds and cheaper airfare to Paris and lower rates at many Paris hotels, autumn is not only a great time to enjoy crisp air and changing leaves, but also an ideal time to save money on your trip.

Because fall is a travel “shoulder season,” smashed in between the summer when visitors flood the city and the holiday season when people come to Paris for Christmas lights, romance and perhaps even some shopping, you have a good chance at finding some particularly great deals on airfare to Paris during the autumn months.

Unless you are accustomed to living somewhere like Hawaii or the Caribbean, when the seasons matter little temperature wise, you are aware that fall is a transition season from summer to winter, and temperatures will vary depending on when during the fall you plan your visit. While the beginning half of September can feel summer like, and you are more likely to wear a skirt, sandals and sunglasses, by October, you’ll be glad to have a coat and umbrella.

Also, even on hot September days in Paris, nights do tend to get quite chilly—so make sure you throw a sweater or light jacket in your bag if you plan on going straight from day-time sightseeing to a meal out or a show that won’t end until later in the evening.

Luckily the coming of fall does not mean a lack of great festivals and events happening in Paris. While there tends to be a higher concentration of celebrating that’s done in the summer, there are still a few major things that happen in the fall that make Paris a great place to visit in the autumn.
Usually taking place during the third week of September each year, les journees de patrioine is a weekend program of events, exhibitions and open/free days at many of Paris’ major cultural institutions—including big museums like the Louvre. The event is meant to celebrate France’s cultural traditions, architecture and art. While you may have to wait in some lines at the more popular spots, this free cultural day is still well worth checking out.

Nuit Blanche, which translates as literally as “white night” and is an expression for all-nighter, is an annual arts festival that takes place from sunset until sunrise on the first Saturday and Sunday of October. Museums , private and public art galleries, pools, cafes, theaters, libraries and other cultural institutions around the city join bars and clubs staying open all through the night for revelers—all for free. It’s a veritable cultural smorgasbord in a city full of culture and art.

At the strike of midnight on the third Thursday of every November, France erupts in massive celebration in honor of the unveiling (or should we say uncorking) of the Beaujolais Nouveau wine. All over Paris you will restaurants, wine bars and cafes offering midnight uncorking of the wine, special menus and celebrations. Even if you aren’t up for staying up into the wee hours of the morning for this event, you will still get to reap the benefits with plenty of specials on this wine for the following weeks.

Other Useful Information about traveling to Paris in the fall: