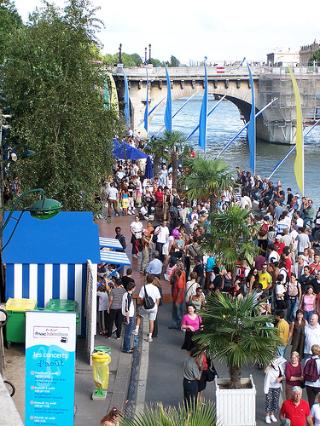 There’s one month out of every year in many European countries where the locals get the heck out of town – and that usually happens to be the same month when tourist come in by the truckload. That month is generally August, and France is no exception – August in Paris is when the streets and cafes that are generally packed with Parisians turn into streets and cafes packed with foreign tourists (the locals have cleverly abandoned the hot and humid city for more temperate climes). This is when most French citizens have their mandated month-long holiday from work, but as they converge on beaches and mountain resorts en masse, visitors from elsewhere converge on Paris. It’s convenient that this presto-change-o happens during the same month – I’m not sure Paris could handle August’s tourist crowds and its regular residents at once.

Of course, it’s not like Paris is completely abandoned by Parisians in August – but locals with the means to get out of town for the month do so. For those who are employed in the tourism sector, or who can’t afford the luxury of an August holiday, there are still plenty of things to do in Paris in August. Which means there will be plenty of thins to keep tourists occupied as well. Remember that this is when airfare to Paris will be at its most expensive, so if your vacation plans mean August is the only time you’ll be able to visit Paris, you’d be smart to start hunting for airfare deals as soon as possible.

Weather in Paris in August
When you’re reading the average temperature readings to find out what the weather in Paris is like in August, don’t be lulled into a false sense of security. While the averages may be around 75F (24C), and while that may sound absolutely delightful, the truth is that recent years have seen heat waves hit Paris and much of Europe in July and August. And with the heat comes humidity in this part of the world. This combination can make August not only uncomfortable but a health hazard to people who aren’t prepared for it. Be sure to check the weather reports before you pack your bags, but once you arrive, if it turns out to be one of those hot day, don’t forget to drink plenty of water and protect your skin from sun exposure. There’s nothing like a bad sunburn or case of heatstroke to ruin a perfectly wonderful vacation.

Having said all of that, August weather can also be really nice in Paris – and the warmer temperatures make evening Seine boat tours or walks through a moonlit city especially pleasant (not to mention romantic). To avoid being caught out in a heatwave, make sure your Paris hotel has air conditioning, plan your day so that you’re not doing your outdoors activities in the hottest part of the day, and take it slow. Stop often in cafes for a refreshing drink, and take advantage of the coolness inside the many churches and museums in Paris.

Things to Do in August in Paris 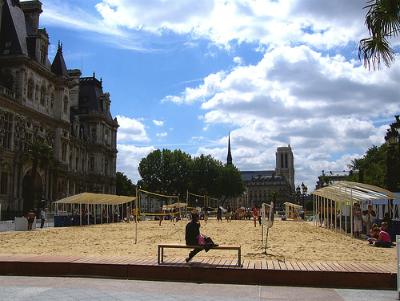 As mentioned, many Parisians take the arrival of August as an invitation to get out of the city and get to the beach, pronto. But for those who can’t afford a month away from home (or those whose employers don’t grant the usual month-long break in August), the city of Paris turns the banks of the Seine into a beach getaway. Sort of. Paris Plage (Paris Beach) begins in July, and you’ll find the river banks transformed by big beach umbrellas, sunbathers and palm trees, all on a bed of the truckloads of sand brought in especially for the occasion. Paris Plage lasts through the end of August, and it’s enjoyed by locals and visitors alike.

The outdoor movie festival at Parc de la Villette which started in mid-July continues through mid-August, and it’s another great way to enjoy the balmy temperatures. There are more than 30 films featured throughout the month, and as of this writing the entry price is only €2 per person. Bring a blanket and a picnic, and enjoy a movie outdoors. It’s such a lovely way to spend an evening, it kind of doesn’t even matter if the movie is in a language you understand or not.

Music fans may want to see who’s on the lineup for this year’s Festival Rock en Seine, which celebrated its 6th year in 2008. The tickets aren’t cheap (a 2008 two-day pass cost €45, and didn’t include the kick-off concert by Rage Against the Machine), but if there are a few bands on the ticket that you’re interested in seeing, it can be a bargain – not to mention a really fun wa to spend a couple of days in Paris. Past performers include REM, Kaiser Chiefs, The Raconteurs, The Roots, and Tricky.

There are usually a myriad of special events and festivals going on in August, so check with the tourist information office or the front desk at your hotel to find out what’s going on when you’re there. Yes, you can always hit the highlights of any visit to Paris (and spending an hour inside Notre Dame or the Catacombs might be especially smart if it’s a million degrees outside), but if there’s something going on during your visit that might not be going on next year it’s worth checking out just to give your vacation that little something extra.

>> If you, like the Parisians, want to flee the city in August, then do like they do and hit the beach – just be aware that you’re likely to see a lot more skin than you might be used to at home! And that’s on all beaches, not just the nude beaches in France!

original photos, from top to bottom, by Pierre Numerique and Choubistar