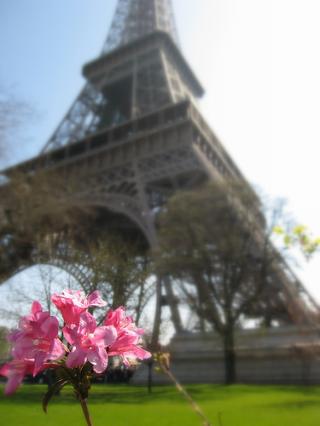 Ah, April in Paris. It must be the most magnificent month in Paris, because they wrote a song about it. Right? It sounds logical, that’s for sure. And there’s plenty to love about Paris in April. But whether it’s the best time to visit this city is entirely up to you – and that quest, which could mean 12 trips to Paris, could be one of the best long-term projects you’ll ever take on.

All joking aside, while Paris is starting to recover from winter in March, it truly begins to shine in April. Everything is green or in bloom (allergy sufferers beware!), and everyone’s in a good mood (despite the rain). Plane fares still have not reached their high season peak rates. Opera and theater in still in going on. The Parisians are still in town, so you don’t feel as if you’ve arrived in a city that’s been abandoned (like in August). Photographers will love those misty Spring days that make the whole world your filter. No matter that the prices on airline tickets and hotel rooms are starting to creep up from their winter lows – if you’re planning your trip to the city in April, you’ll quickly realize just why this is the month that’s captured in the song.

Weather in April in Paris
So, with all those positives about visiting Paris in April, what could possibly be the negative? Well, in a word, the weather. It can be really hit or miss in April. The temperature in April can dip as low as the mid-40sF (7C or so), but it can also get up to around 60F (15C). Some years, April has been balmy and sun-filled, but the norm is to expect some rainy days when you’ll be very glad you brought an extra warm sweater and a water-proof jacket (April is, after all, also the month that’s supposed to be really rainy according to the old nursery rhyme). So the key to packing for Paris in April is to think in terms of layers. Light layers with a light water resistant jacket over the top will leave you prepared for just about anything, though if you tend to run cold (or the weather reports are indicating chillier than normal temperatures) you might want to throw in one sweater. And with the likelihood of some of those April showers, having shoes that are water resistant is a good idea, too – no one likes slogging through the Louvre in wet shoes.

What’s Going On in Paris in April
One of the few things that shuts down the Champs-Elysees every year is the Paris Marathon, which takes place in April. The date for the annual race changes, so check the official website for details about this year’s avent. And even if running a marathon isn’t on your holiday to-do list, it’s a spectacle that you might want to check out while you’re in the city – or, if you’re up for a walk, you could try walking part of the route. It’s a great way to see parts of Paris that you might not otherwise get to see – it starts on the Champs Elysees and heads west toward the Bois de Vincennes before looping back again toward Avenue Foch.

There’s the annual Banlieues Blues Jazz Festival which music lovers will certainly enjoy, but it takes a bit of initiative to get there – it’s located in the ‘burbs just outside of Paris. Ask at a tourist information office for details about how you might make the trek if you’re in the mood.

While Paris gardeners are hard at work to get the gardens looking delightful for the summer crowds, the first free garden concerts begin in some of the city’s bandstands (like the Jardin du Luxembourg). Check with the tourist information office or your hotel’s front desk to see if there are any free concerts while you’re in town.

One of my favorite spring events, the annual Foire de Paris (Paris Fair), starts in late April and runs through May. Each year, the Foire takes over the Porte de Versailles convention halls. This is the place to go to taste wine, try regional specialities, look at the latest in interior design and house construction, as well as the latest gadgets. Normally we don’t get too much past the wine and foie gras stands, but there’s plenty to see – plan on staying for half a day, or a whole day. Each year gets better.

Another city fair, the Foire du Trône, is more of what you might think of when you think of a city fair – there are merry-go-rounds, roller coasters and other carnival rides, as well as all the disgusting (and disgustingly wonderful) carnival foods you’ve come to know and love. The fair usually runs from late March through late April at the Pelouse de Reuilly (a square between the 11th and 12th arrondissements), and it’s been going since the 12th century.