An Open Letter to Jaded Foodies: You'll Always Have Paris 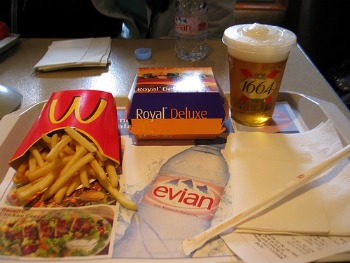 Every year, France tops the list of the world’s most visited countries. The numbers for 2009 are astonishing – there were 74.2 million international tourist arrivals to France – almost 10 million more than the country’s population. It far outdistances second-place United States, with only 54.9 million visitors. And, as surely as day follows night, Paris is the most visited place on the planet. Forbes Traveler calls Paris the “unofficial cultural theme park of the world.”
As we as a society have evolved as travelers, though, it sometimes can seem as though Paris has lost its, well, Parisian-ness. We hear about a McDonalds opening at the Louvre, and we mourn the globalization of cuisine – as goes food, so goes the culture. We’re sure that the Paris of our dreams, or at least of our gap year, has drowned in a sea of Big Macs and bedazzled Eiffel Tower tote bags.
Yes, there are many McDonalds outlets in Paris. Meek-dough, the French call it. There are plenty of Starbucks, too. But, what of it? If you don’t frequent them at home, you’re not going to frequent them abroad. Get over it.
And you know what else? You may whinge about how “over” Paris is to your fellow travelers as you announce your upcoming bike tour of rural China, but the numbers don’t lie. The lure of Paris is simply too strong to avoid the idle lunchtime check for ticket prices on flights to Paris, or the bookmarking of every article you read about cheap Paris hotels. And don’t tell me you heart didn’t skip a beat as you watched Tony Bourdain swoon his way through the Parisian food scene on his 100th episode of No Reservations.
Simply put, the globalization of cuisine is a fallacy when it comes to Paris. For someplace that’s so inundated with international tourists, they really haven’t bowed to their culinary whims. National pride and inherent French food snobbery trumps tourist dollars, even in the cafés that line its heavily trafficked avenues. Just as they will never, ever believe that customer is king, neither will they change their menu because little Timmy only eats chicken fingers or you’re hankering for a BLT.
Maybe it’s because French food has become so much a part of our own culture. From Burger King’s croissandwiches to the McDonalds fries that always rank number one on the list, if anything it is we who have globalized cuisine, not the French. They’re still toiling away over their coq au vin and their perfectly clear consommés, making them the same as they have since before Escoffier laid bare the inner workings of French cuisine for all the world to see.
So, jaded foodies, fear not – your secret guilty pleasure of Paris is safe with me. Keep checking on those flights to Paris, and book your cheap Paris hotels so you can save your money for that little bistro you’ve been dreaming about since your last visit. It’s still here, and it’s still very, very French.
Photo by jshyun