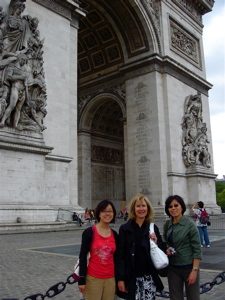 One of the pleasures of living in Paris is the opportunity to share the city with friends. Planning a six-day visit to Paris with at least one excursion outside of the city offers the challenge of trying to sort through the myriad of possible visits, museums, landmarks within the Paris city limits and those ‘can’t miss’ locales within reasonably easy driving distance (or train) from central Paris.
So, join us on a day-by-day excursion with our friends Yinjie, James and Diana who are visiting from south Florida for a well-deserved break from work and university studies. This will be a first trip to France for two of our three guests. I asked all three if they had a ‘wish list’ of sights to see in Paris, and museums are high on the list. The Rodin Museum ,the Louvre, the Musee d’Orsay are all in the ‘must-see’ category.
Add to that a walk down the Champs Elysees, a stroll through Montmartre for a panoramic view of Paris from the footsteps of Sacre Coeur, and a walk along the Seine River. We haven’t quite decided on how to approach the Eiffel Tower. Whether we climb the steps, take the elevator or just enjoy the view of the Eiffel Tower from a boat or from the top of Tour Montparnasse is still up for discussion. For the one added trip outside of the Paris city limits, I’ve suggested two overnights in Normandy starting with a hike across the Mont St. Michel bay. This will be the last summer that such a hike will be possible until 2015. A huge project to dredge the area surrounding Mont St. Michel will prohibit hikes for the years to come. Normandy can be reached in a few hours and provides a nice contrast to ‘city living’ for those eager to enjoy a glimpse of French countryside.
Preparation for Day 1
Getting a Museum Pass
The Paris Museum Pass allows you immediate access to approximately 60 museums and monuments in and around Paris including Versailles, but not including the Eiffel Tower. A number of Paris museums are currently free to the public, so if you’re trying to cut costs, you might want to check to see if any of the museums you plan on visiting are listed under Free Paris.
You can buy your Paris Museum Pass right at the CDG airport’s tourist information booth. In our case, we went to the main Office of Tourism located on Rue Pyramides (just past Eglise St. Roch), Metro: Tuileries.
Buy Metro tickets in advance. At least one carnet (or ten tickets) should get you in motion. You don’t want to be caught fumbling for change to buy Metro tickets when you’re trying to juggle luggage at the same time.
Getting in touch BEFORE you get on the plane
Phone calls. Pre-flight phone calls are always a good idea to cover some last minute reminders about what clothes to pack. June weather in France can be extremely changeable. This year, June has fluctuated from perfect, sunny 75 degree F days to overcast and windy with a hint of rain. ALWAYS bring at least one warm sweater or windbreaker for cool nights in Paris (yes, even in August).
What’s New?
A second reason for the pre-flight phone call is to give updates on events in Paris. Since this past Monday, several sectors have gone on strike including a truckers’ strike, taxi drivers’ strike, some public utilities and maritime port strike.
Mobile phone number exchange. This is the ideal time to confirm mobile phone numbers for communication on arrival.
Have you already exchanged some home currency for Euros? Some banks require at least two days advanced notice for currency exchange. You can normally use your credit card to take out Euros from cash machines in Paris, but you’ll want to have some cash on hand for the unexpected event (i.e. the restaurant that doesn’t accept credit cards or the newsstand kiosque that may not accept credit card payment for a mobile phone recharge card.
The reason I mention these topics: currency, right clothes, mobile phone numbers, and strikes is because they ALL came into play during Day One.
Even though we were able to pick up the 7 am Air France shuttle bus at Montparnasse to meet our friends at the airport, by the time we had returned (after a two hour delay for Air France’s Miami to CDG flight), we were informed that the return shuttle bus to Montparnasse had been canceled due to a strike.
Note: For some reason, when Air France shuttle buses go on strike, it’s invariably the Left Bank Montparnasse stop that gets shafted.
Thanks to having mobile phone numbers handy (with tri bands to call US numbers as well as French numbers), we could communicate with Yinjie, James and Diana from one side of the customs barrier to the other.
First Stop: Arc de Triomphe 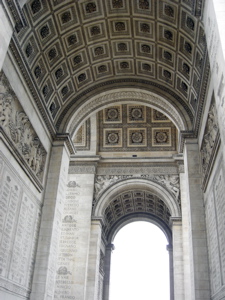 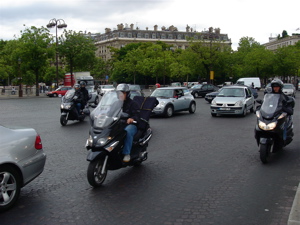 Sometimes a strike can end up being useful. Air France’s shuttle alternative took us straight to the Arc de Triomphe (Charles de Gaulle Etoile), so in effect, we started off the trip with a mini Right Bank Tour. Here’s where you’ll be really glad you packed light – one rolling bag per person is all you’ll ever need for six days in France. Trust me on this one. You’ll be very happy when you’re lugging that rolling bag up and down Metro steps.
Thanks to stalwart Christopher who volunteered to man the luggage on a park bench, four of us headed for the underpass that leads to the Arc de Triomphe. Before saying goodbye to whomever has been entrusted with your luggage, be sure to note on WHICH of the twelves avenues you’ve left your loved one and all your personal belongings. This will save you the trouble of walking three quarters way around the Place Charles de Gaulle Etoile (in the wrong direction). Note that you MUST take the underground tunnel to reach the Arc de Triomphe (unless you’re feeling particularly suicidal). When you walk into the Metro, follow the well marked signs and icon for the Arc de Triomphe. The corridor is sparsely lit – so be aware of your surroundings – and your personal belongings!
There are twelve avenues that feed into the Arc de Triomphe which is why it’s called Etoile or Star – from the sky it looks like a star. At the Arc de Triomphe, you can walk around the Arc and visit the unknown soldier’s tomb for free. If you want to climb up to the top, naturally, there’s a fee to do so. (Arc de Triomphe is one of the sites included in the Museum Pass).
When we finally reunite with Christopher, after a fine flurry of picture taking in front of the Arc de Triomphe, in back of the Arc de Triomphe, from the side of the Arc de Triomphe, we duck into the closest Metro stop. The #6 line will take us from Charles de Gaulle- Etoile straight to Edgar Quinet in Montparnasse for a mere 1.50 Euros per person. The strike has cost us however an additional 7.50 Euros. If we had needed to take a taxi, it could have been much more! Luckily everyone in our travel savvy group has limited himself to one easily manipulated roller bag! Whew!
The number #6 line gives first-time visitors to Paris a glimpse of not only the Seine River, but also the Eiffel Tower when the underground train pops up above ground long enough for these two dandy views. I love this Metro line. You can stare into the rear windows of posh Eiffel Tower neighborhood apartments. You can catch the glint of late afternoon sun on the Seine. When you’re poor, for a moment you can imagine at this elevation that you’re a short term neighborhood resident. Whooshing across the Seine at high speeds, even Metro riders become VIPS with non-stop access to the Left Bank. Ahhh! If only Princess Diana had opted for the Metro. She would have left the papparazzi dumbstruck with their jaws gaping. Did you know that the contemporary heir to the French throne used to take the Metro? The Metro is Paris’s great equalizer. Not only that, but when the SNCF isn’t on strike, it’s tremendously fast and efficient.
Jet-lag remedy: Food and Sleep 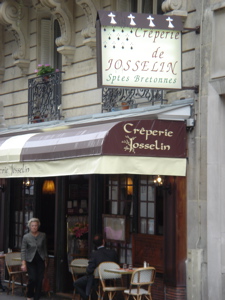 As mentioned in an earlier post, the two major issues of Day One in Paris are Food and Sleep.
Therefore once all luggage has been safely dropped off at the apartment, we are in dire need of fueling – not any Michelin star cuisine for the first day, but a good substantial meal.
Because Diana mentioned that she has never tried French food, I suggested we walk over to Rue Montparnasse to try a traditional Breton galette (pancake) or crepe. The galette is normally filled with salty ingredients such as sausage, cheese, eggs, and various vegetables. The crepe is the sweet version reserved for dessert. 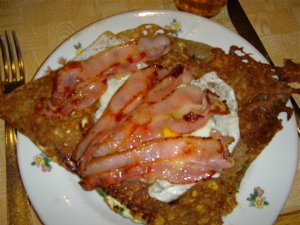 My first choice is always Chez Josselin, the restaurant closest to the Edgar Quinet and Rue Montparnasse intersection. There are several very good reasons to frequent Chez Josselin.
First of all, the food is traditional and served in a traditional Breton setting. Secondly, the price is very easy on the wallet (but don’t try to use your credit card here – they only accept cash!). Any restaurant in Paris where you can feed five people (five galettes plus two bottles of spiked cider for 50 Euros ) is reason enough to return. No wonder a line of people waits for a spot at this restaurant that squeezes in as many warm bodies as possible on a Wednesday night no less.
Luckily we’re here in the mid-afternoon, just after the lunch hour rush. And, finally, the icing on the cake is the friendly goodbye from our hostess – who states that we are most welcome with ‘open arms’. I’ve been going to a lot of restaurants in Paris for the past few years – and this is the only place where a proprietor has suggested welcoming us with open arms. Pretty soon it will be two kisses on each cheek.
We pause at Blvd. Edgar Quinet for is a mini discussion about the Robert Wallace fountains Robert Wallace was the Englishman who so loved Paris that he gave it the best gift one could ever want – free public drinking water presented in ornate drinking fountains (which once included attached cups).
Now it’s back to the apartment for a long blissful jet-lag induced sleep. It doesn’t matter when we wake up. The Eiffel Tower awaits.
Creperie Chez Josselin
67 Rue du Montparnasse
75014
Note: If you’re going for dinner, arrive early to catch a table before the crowd!
Metro: Edgar Quinet