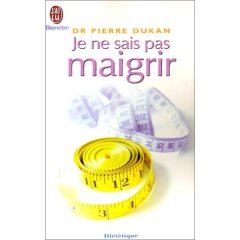 This are five suggestions included in Dr. Dukan’s bestseller diet book Je ne sais Pas Maigrir (I don’t Know How to Get Thin)

Summer is over and it’s time to do damage assessment: Far too many aperos – wasn’t that Loupiac tasty with the foie gras de canard? Mmnnn, Christina’s sponge cake recipe for Jean-Pierre’s birthday, Daniel and Francoise’s imported rum for poolside rum & Cokes.

But fortunately, early in the summer season, Davine, a family friend who is also a doctor (and diet knowledgeable) left me with this book title: “Je ne sais pas maigrir” by Dr. Pierre Dukan.

Translated as ‘I don’t know how to lose weight’, the book (which I picked up at FNAC bookstore (the sales clerk knew the title immediately) is plugged as ‘The Dukan Phenomena – already 1 million conquered readers!’.

At first glance, Dr. Pierre Dukan’s ‘Je ne sais pas Maigrir’ diet looks like a rehash of Atkins, South Beach, or some of those seventies protein diets. But it really was designed for French taste: Eat lots of meat as often as you want and don’t exercise. No surprise that a French diet or ‘regime’ has some amusing twists on the typical American style diet.

For the first phase (called the attack phase), don’t exercise. Well, don’t exercise, the doctor says, but don’t take the elevator in your apartment building. That’s an easy thing to do because half the elevators in the Paris metropolitan area are ‘en panne’ and barely functioning most of the time (which is really quite amusing when you live on the 14th floor in a housing project). If you’re not clomping up winding apartment staircases, you’ll be hustling up and down Metro steps (the escalators when you can find them – work part of the time).

It’s a great welcome back to Paris after your summer vacation. Think I’ll go grab a burger. (By the way, you’ll have no trouble finding a hamburger these days in Paris because hamburgers are hot! Just remember you have to eat it WITHOUT the hamburger roll and the ketchup, but keep the pickle and the mustard).

I am currently on Day 3 of of Dr. Dukan’s ‘I don’t know how to lose weight protein diet’ which I’m calling the ‘Paris Diet’ for simplicity’s sake. I’m also on jetleg. Which means waking up at strange hours – and being hungry. During the attack phase (which lasts from three to five days depending on how many kilos you wish to shed), you can eat at ANY time of day from the following list:

You’ll notice the obvious elements missing from a typical Parisian diet – the baguette. The other typical element missing – wine, of any sort.

What you have to admire about Dr. Dukan’s 247-page diet plan: The word ‘croissant’ is not once mentioned. Neither is dessert. Rather, he uses the word ‘gala’.

If you manage to survive the first two stages of this diet which consists of total protein for three to five days, followed by Phase II – Cruising (protein interspersed with vegetables), you get to Phase III which allows for two gala days per week.

Dukan’s definition of ‘gala’ means you can eat or drink ANYTHING you want for A MEAL, not for the entire day – AND you may only serve yourself ONCE i.e. one glass of champagne for the cocktail hour, one glass of red wine to go with your meal, one serving of Baked Alaska. You get the picture, hedonism minus the binge.

Right now, the Gala days appear to be far, far away. Think I’ll go console myself with a16 oz. steak. (Parisgirl suggests you consult your doctor before starting ANY diet plan!!)

If you would like to follow Parisgirl’s progress (or lack, thereof, on the Dukan diet), add Parislogue to your daily feed for updates.