5 Free Paris Attractions for Romantics on a Budget [Sponsored Post]

This post is brought to you by Octopus Travel. For more information on sponsored posts read here. 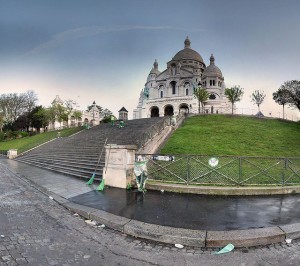 Famously romantic but notoriously expensive if you don’t watch your pennies, Paris can be a challenge for travellers on a measly budget. However, once you’ve completed your search of cheap Paris hotels and found somewhere to stay, you can continue your budget break by visiting several sights that won’t cost you a cent…

If you time your visit to coincide with the first Sunday of the month, you can visit the Pompidou Centre for free. The design of this art complex, with its garish external tubes, was considered outlandish and controversial when it was completed in 1977, but over the years it has become a familiar landmark in the city’s urban landscape. Inside you can look around the Musée National d’Art Moderne, while outside in Place Georges Pompidou you can often enjoy some free street entertainment.
Where: Place Georges Pompidou, 4th arrondissement. Nearest Metro: Rambuteau or Les Halles.

Climb up to Basilique du Sacré-Coeur

It costs nothing to visit the gleaming, white-domed Basilique du Sacré-Coeur, a famous Parisian landmark perched on a hill at the highest point in the city above the bohemian district of Montmartre. The impressive interior of this Catholic basilica contains neo-Byzantine mosaics, while the dome itself offers fantastic views over the city. Outside, a park leads you downhill past seats from which you can enjoy the Paris skyline, and in charming Montmartre you can watch artists at work.
Where: Parvis du Sacré-Coeur, 18th arrondissement. Nearest Metro: Abbesses.

Take some time out in Parc Monceau

To escape the city crowds, Paris offers a wide choice of parks, but Parc Monceau with its beautiful flower gardens, grotto and waterfall is one of its most beautiful of all. Dating back to 1769, it has been the subject of several famous Monet paintings.
Where: Boulevard de Courcelles, 8th arrondissement . Nearest Metro: Monceau.

If you visit Paris in late July or early August, a string of palm tree-lined artificial beaches springs up along the river Seine, hosting a range of outdoor activities. While many Parisians flee the city during these hottest months of the year, for those that must stay behind the beaches offer some respite. Although you can’t swim in the Seine, recently a floating swimming pool was created, and every year new features are added to the scene. The beaches are usually open on or around 20 July for four months each year.
Where: various locations each year.

Pay your respects at the city’s most famous cemetery

Said to be the world’s most visited cemetery, the Père-Lachaise soon became the most prestigious burial ground in Paris thanks to its royal connections, and today it contains the graves of many interesting characters. Take a stroll through the grounds spotting the graves of singers Edith Piaf, Maria Callas, and Jim Morrison or The Doors; writers such as Oscar Wilde, Molière, La Fontaine and Balzac; impressionist painter Camille Pissarro; and composer Frédéric Chopin – amongst many other famous figures.
Where: Boulevard de Ménilmontant, 20th arrondissement. Nearest Metro: Philippe Auguste.
Other top free attractions in Paris include the Notre-Dame Cathedral, the Curie Museum; and Friday fashion shows at Galeries Lafayette (although you need to reserve a free place by emailing welcome@galerieslafayette.com).