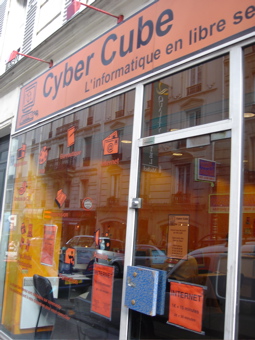 Looking for QWERTY? You’ll discover that in many French internet centers, the French computer keyboards are quite different from American or British keyboards. This is partly due to the use of accents on many of their words.

If you want to find an English language keyboard at an internet center, you can ask whether they have the ‘QWERTY’ keyboards (claviers, in French). The French keyboards are called AZERTY. Why these strange words? Those are the top keys that you’ll see on the English versus the French Keyboards.

One of my favorite internet centers is the Cybercube internet center on Rue Odessa. Rue Odessa is a short street which you can reach either from Metro: Montparnasse (exit at Rue Odessa/Rue du Depart). Cybercube will be the SECOND computer center on your left if you come from Montparnasse. Otherwise take the Metro stop: Edgar Quinet. Cross over to Rue Odessa and Cybercube will be toward the end of the street on your right. The staff at Cybercube are generally bilingual and they have plenty of QWERTY keyboards.

>> Get more Paris travel tips from a local before you go!