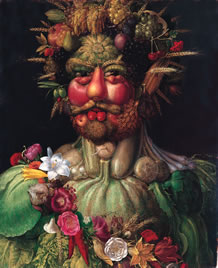 The Musee du Luxembourg is quickly becoming one of my favorite museums. Although we unfortunately missed the Lalique exhibit which was highly praised by friends in Paris, I will make it a point not to miss the Giussepe Arcimboldo show which will be running until January 13, 2008.

What’s the big deal about Arcimboldo? If you’ve never seen an Arcimboldo painting, you may wonder whether or not he’s a contemporary artist. He isn’t. He died in 1593. His most famous oils are are portraits where faces of aristocrats become a composite of fruits and vegetables.

Here as an artist who took the proverb ‘you are what you eat’ to heart.

The big surprise for a first time viewer is to realize that Arcimboldo lived during the 16th century, not during the 20th or 21st centuries. Even more of shock is to learn that his paintings were well accepted by the patrons of his day. In fact, he found a longtime home at the Hapsbourg court (25 years). Some consider him to be a pioneer of modern art.

The beauty of the Musee du Luxembourg exhibit is the fact that 40 of his oil paintings will be on display. This reminds me of past exhibits such as the Titian and Modigliani exhibits, both veritable treasure troves for fans of these artists, considering that the chances of seeing such a massive gathering of one artist’s work is a rare event.

Another thing I like about the Musee du Luxembourg is its accessibility. The Museum is open every day and also has evening hours. Admission is 11 Euros. It’s located next to the Luxembourg Palace (the Senate) end of the Luxembourg gardens. The closest Metro is the Luxembourg stop on the RER line. (Or taking the Metro, you can cross over from Rue de Rennes, using the Saint Placide or Saint Sulpice stops. You can access the museum at No. 19 Rue du Vaugirard. Have an expresso or a light meal at the cafe adjoining the museum.

And don’t forget – you are what you eat. Arcimboldo will remind you.