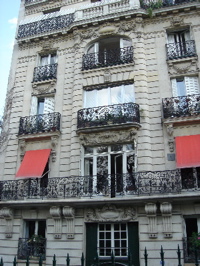 Choosing accommodation in Paris can be daunting simply because your expectation level is high. When you’re staying in one of the world’s most beautiful cities, you might already have some images in mind – canopy beds, silk sheets, ornate moldings. You probably won’t expect to find those things in the budget hotels in Paris, but if you’re looking for a bit of Parisian romance in a hotel at a reasonable price that’s definitely attainable.

Paris accommodation runs the gamut from the most luxurious hotels to basic bunk rooms in hostels, with everything in between. Staying in Paris isn’t typically cheap, as it’s an expensive city overall, but if you avoid the more expensive neighborhoods and you’re willing to do a little research, there are perfectly nice budget hotels in Paris that make the ideal homebase for a budget-friendly trip to the French capital.

There’s a breakdown below of the different kinds of accommodation you can expect to find in Paris, with links to more details about each one – and, in most cases, links to lists of accommodation options that include maps of the city so you know where exactly each place is.

As mentioned above, hotels in Paris come in all varieties along the typical hotel spectrum. If you can afford one of the high-end hotels, you’re spoiled for choices and you’re very lucky – but for the rest of us, finding a cheap hotel in Paris is an important component of staying within one’s travel budget.

Staying in a budget Paris hotel isn’t just about saving money, however, as many travelers prefer to avoid 4- and 5-star hotels because they’re too isolating. Walk into those hotels and you could be anywhere in the world. In a small or family-run 2- or 3-star hotel you’re more likely to have a better look at where you really are, and when you’re in Paris that’s a very good thing.

You will find that Right Bank hotels, primarily in the 16th and 8th arrondissement, tend to be more expensive than Left Bank hotels – and hotels around St. Germain-des-Pres will generally be more expensive than both Montparnasse hotels and Blvd. St. Michel hotels. Other inexpensive and safe neighborhoods to consider are Rue Mouffetard (which is suggested by Rick Steves), Portes d’Orleans/Alesia, Montmartre (where you’ll find several hostels), and Bois de Vincennes. Even though some of these neighborhoods may not be as close to the major museums, the Paris Metro will get you everywhere in no time.

There are plenty of comfortable and affordable hotels in Paris, and the articles listed below should help you find one that fits your travel needs and is in a part of the city you want to be in.

As expensive as Paris is for accommodation, there’s a long list of hostels in Paris that you can stay in to save money on your trip. The hostels are scattered around in several parts of the city, but there are a couple of neighborhoods where there’s a higher concentration of hostels than in other areas.

Most of the Paris hostels use the English word “hostel” in their name, but there is also a French term for “youth hostel” – auberge de jeunesse – that you may occasionally see. These articles include listings for hostels in various parts of the city, and each has a map showing exactly where the hostels are.

>> Search and book hostels in Paris

Other Alternatives for Paris Accommodation

Whether it’s for budget reasons or not, if you’re looking for something a little different than the standard hotel or hostel options in Paris you do have alternatives. Here are a few you might not think would be available in Paris, as well as some French accommodation terms to look for on search sites.

>> Also consider renting an apartment in Paris – Paris vacation rentals can be a good way to save money, especially if you’re with a group, and they’ll give you a chance to see the city more like a local.